Singular ‘they’: A user’s guide This, of course, leads to the question of how to refer to an individual human subject or object with a pronoun if the gender identity of that human individual is unknown or irrelevant:

Historically, singular they has been in use in this context since the 14th century (Oxford English Dictionary):

However, the mid-18th century brought on a slew of prescriptivists who considered singular they to be ungrammatical, opting for generic he or restructuring/rewording the sentence to avoid entirely the need for a generic pronoun:

In modern times, generic he has come under a lot of scrutiny, leading to discussions about inclusivity and a shift away from unnecessarily gendered pronouns (like generic he). With the intention of making writing more inclusive and accessible in such cases, prominent style guides began making a range of suggestions such as including both singular pronouns (e.g. he/she), using parentheses to combine pronouns (e.g. (s)he), or for the especially progressive at the time, leading the pair with the female pronoun (e.g. she or he):

But some argued that is a lot of extra key-strokes and can become as much of a distraction to a reader as not having their (see what we did there?) pronouns acknowledged in a document.

Speakers have always had a simple, efficient solution all along (remember the note about the 14th century above?): they works just fine to describe an unknown (or even known, if you do not want to give away their identity) individual. At the English Language Institute, we maintain that the below sentences are natural, comprehensible, acceptable, inclusive, and dare we say, ‘correct’:

Style guides have taken note of this movement towards using they/them/their as pronouns to describe individuals when the gender is unknown or irrelevant. As of 2019, the American Psychological Association (APA) included in their style guide, “The singular ‘they’ is a generic third-person singular pronoun in English. Use of the singular ‘they’ is endorsed as part of APA Style because it is inclusive of all people and helps writers avoid making assumptions about gender.” The Modern Language Association (MLA) and Chicago Manual of Style have not been as enthusiastic in advocating for the use of they/them/their as singular, gender-neutral pronouns, but have both included the usage as an option for writers in their latest updates. At this point, a writer should feel confident that they have the support of most major style guides if they chose to use they/them/their as a singular pronoun in their writing.

Another consideration to make when using they/them/their as a singular pronoun is that not only can these pronouns be used to be gender-neutral, but also to reflect a particular person’s gender identity. There are people, for example some members of the trans[gender] community, who prefer to be referred to using they/them/their pronouns not because these pronouns indicate that their gender is unknown or irrelevant, but for exactly the opposite reason. For these individuals, they/them/their is a way of having their gender identity seen and acknowledged. All of the style guides agree that knowing and respecting an individual’s pronouns when a writer is describing them is a best practice. 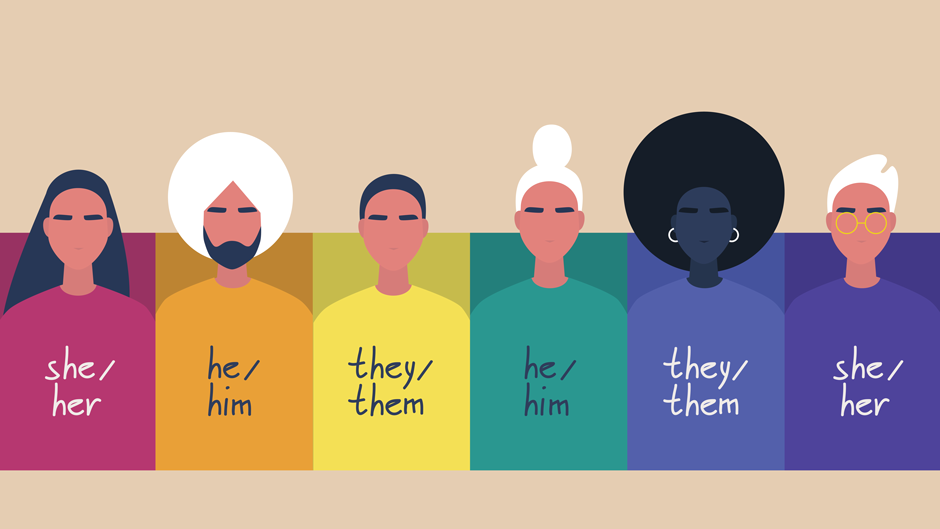 Central to our values at the English Language Institute are the concepts of Empowerment, Accessibility, and Respect. Whether a writer is using pronouns to create a more gender-neutral or gender-inclusive document, they are making decisions involving feeling empowered as a writer, making their ideas accessible, and showing respect for their readers. We believe that knowledge of the rules for how English is used as well as the knowledge of how individuals actually use the language are useful for making critical decisions about how to use language in any situation. If you would like to discuss this topic further, please reach out to us in person or in the comments below; we would be happy to help you discover more resources.

We used a lot of singular they/them/their in this blog post. How many do you see?